Fratelli Boffi takes part in Salone del Mobile 2017 with an unpredictable yet classic collection, where the luxury and grandeur of distant time periods acquire a modern touch thanks to daring ideas, unexpected finishings and the company’s woodworking skills. 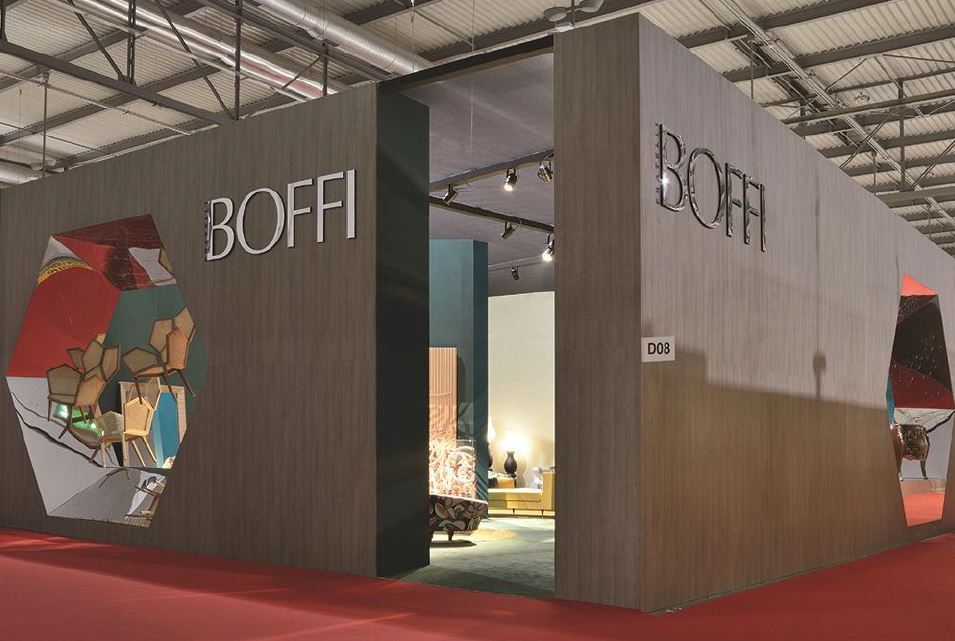 Appealing settings, original, unpredictable combinations bring together areas with very different identities but with the same imaginative and captivating concept which has been interpreted this year by Ferruccio Laviani, whose name is indissolubly tied to the history of the company and to many of its best-known  icons. Precious materials, complex productions and astonishing products are thus modelled in the new ‘La Recherche’ Collection, displaying a ‘Proustian’ aesthetic and emotional research. 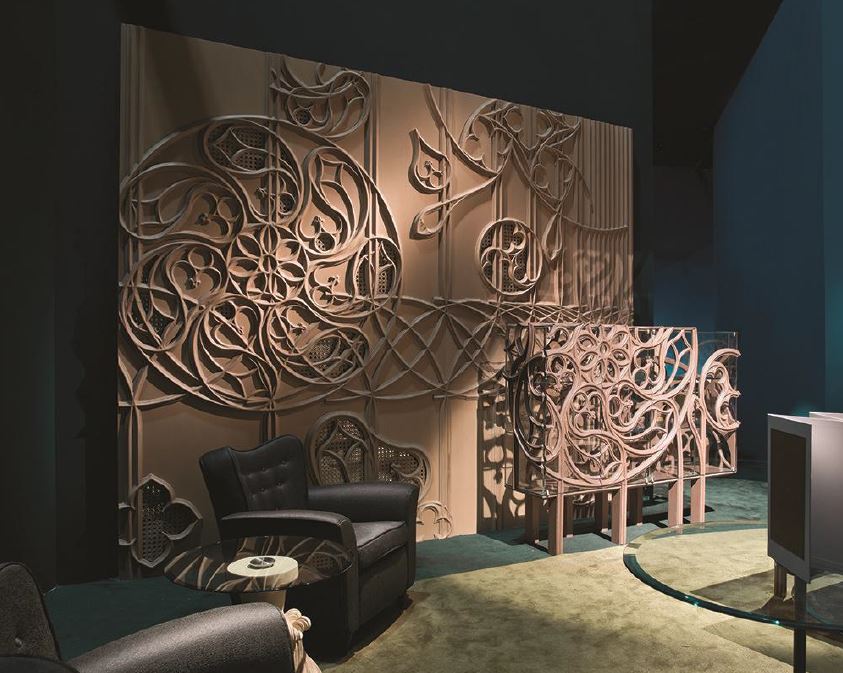 The first living area opens the collection ‘La Recherche’ like a first chapter, immersing us into a tale about the latest products by Fratelli Boffi.

The boiserie Gothik-B and the cupboard Gothik-A designed by Ferruccio Laviani mark the beginning of  a manifold narration which combines extremely different styles, connected by the theme of memory, which

– as in Proust’s book – is the means for us to evolve through recollection and art.

The collection Gothik takes Fratelli Boffi’s craftsmanship and woodworking tradition to extremes, mixing them with features from Gothic style, juxtaposing, distorting and manipulating them to create a precious, architectural decorative pattern.

The grandiose boiserie Gothik-B presents itself as a tall glass wall with rose windows and vaults, evoking the façade of a work of 12th-century French architecture, a cathedral in the heart of Normandy. The glass wall of the boiserie appears as a decorated piece with ash grey finishings, replacing the lightness of wood  to heavy stone blocks, enhanced by stained glass details and cane.

Fratelli Boffi‘s cabinet-making skills and Ferruccio Laviani‘s creativity also originate Gothik-A, where   the decorations used for the boiserie – the durmast version of it – grips and envelops a transparent glass case like a cobweb, creating an eclectic piece of furniture. Gothik-A is an object that gives the surrounding area a contemplative look, enticing those who pass by it to look at it, gazing at the intersecting Neo-Gothic twirls, separated by the unit’s crystal clear surfaces. At the basis of the cupboard, the decoration flows downwards toward four thin legs which make the ensemble look even lighter, almost as if it were suspended. 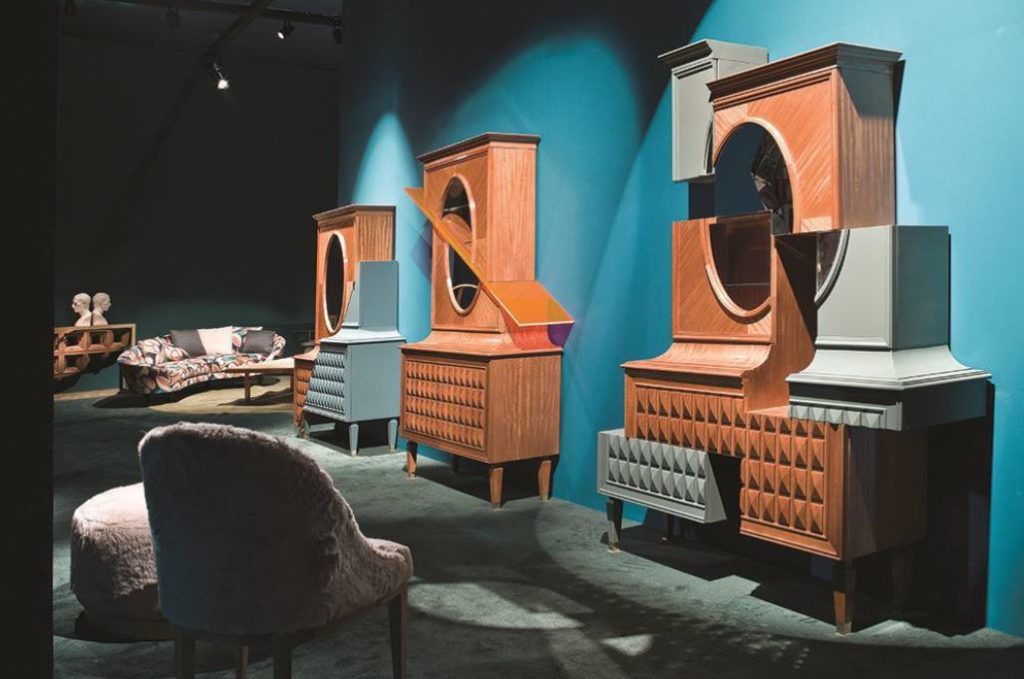 As we proceed across the exhibition space, the eye is caught by the collection D/Vision by Ferruccio Laviani where the designer implements a process of decomposition and separation, on different levels. Starting from the trumeau – a fashionable item back in the 1950’s – Laviani redesigns its outline, making it an unexpected, surprising object, while still unveiling its original shape.

The collection is made up of three versions, visionary objects, masterfully showcased in an entirely dedicated space: D/Vision .0, D/Vision .1, D/Vision .2. 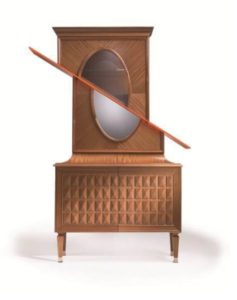 D/Vision .0 maintains the shapes and finishings of the original furniture, as well as the crimped walnut typical of that time period,  the ashlar-work of the lower part and the brass  tips. The  ensemble is subverted by a long, orange, fluorescent Plexiglas sheet which cuts the upper part of the item like a blade, altering its structure.

The oval mirror in the middle of the upper part is thus divided into  two parts and, as a result of this split, acquires two different materials.

Therefore, the upper part is mirrored, whereas the lower part lacks the mirroring effect and is made of glass, so that the shelves and the content of the unit remain visible.

In the second version, D/Vision .1, the unit is literally divided into two parts by an imaginary diagonal 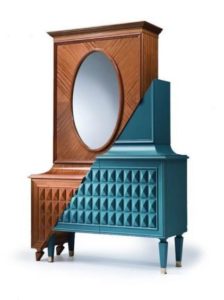 The bipartition is reproduced by the colours and finishings, contrasting the blue lacquering of the lower part and the crimped walnut of the upper part, where the oval mirror was also kept.

D/Vision .2, the last of the three projects completes the 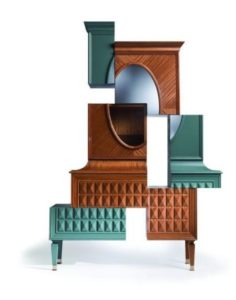 metamorphosis, by dividing the original item through some sort of explosion. Like a Cubist painting, which shows the subject from different viewpoints as in a perspective, the trumeau is also decomposed into different parts and immortalised.

Each part becomes a unit of its own, but the power of the whole ensemble emerges as we observe its beauty. The addition of army green painted backgrounds, alternating with parts where the original crimped wood was kept, completes the design of a product which almost erases the borders between a unique piece and a collection item.

The Fratelli Boffi production reveals all its potential: its natural attitude to the creation of custom projects, the inclination towards  precious materials and an incredible attention to detail, characteristics that for  nearly a century distinguish the Italian company.

The tale of ‘La Recherche’ continues with the new collection In Furs, designed by the couple Analogia Project and composed of an ottoman seat and a storage unit. The project turns these furniture pieces into conceited creatures, dressed to the nines with leather upholstery inspired by haute couture.

Cabinet In Furs is made up of an Italian walnut or dark durmast cylinder, with a leather top and a wooden base. Like a Venus in Furs, the unit is literally enveloped by the soft upholstery, hiding the lateral opening which conceals the interior with its precious wooden shelves. Presented in its original pony version and in the other, puffy, long-haired version, Cabinet In Furs lends itself to many interpretations, making aesthetic and material customization absolutely doable. 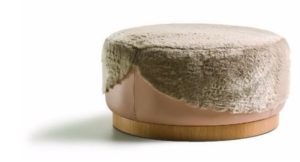 Ottoman In Furs is a stuffed item with generous, round shapes. Its entirely leathered surface comes with a fur top which partly covers both its seat and sides, creating gentle combinations and chromatic tone-on-tone mixtures. Available in two decorative versions and in a fur or leather-on-leather version, Ottoman In Furs becomes the perfect element of a glamorous, sophisticated setting.

The sofa Madeline by Fratelli Boffi Studio has a sinuous, feminine shape and an extremely generous size, supported by small tapered wood feet. The bean-shaped structure, recalling the 1950’s, is covered with a clearly pictorial gaudy floral motif, influenced by typical techniques of XX- century American Expressionism, resulting in an item with a very strong impact. The seat is made up of a single cushion, circled by a stuffed seatback which can be raised and lowered, creating sinuous shapes and making up two armrests on the two sides.

Leonie is instead an overtly Sixties-looking armchair, inspired by the well-known seats which crowded the clubs and country houses of British countryside during that decade. The V-shaped seatback – stuffed and embellished by a capitonné topstitch pattern which follows its shape – joins the two armrests in a waltz of flowing, flared lines. The soft seat cushion perfects a piece of absolute comfort. Four small  polished  durmast feet, with ash grey finishings, gently hold the armchair and complete its structure. 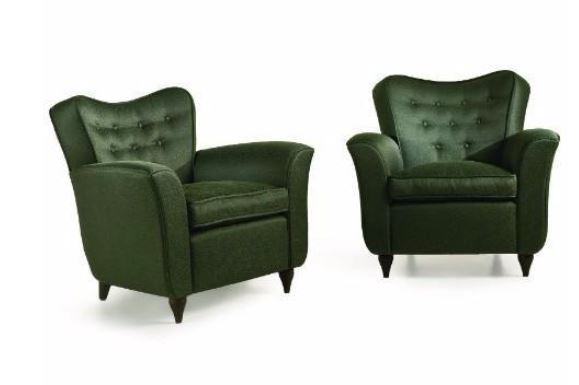